"Yoga, an ancient but perfect science, deals with the evolution of humanity. This evolution includes all aspects of one’s being, from bodily health to self-realization. Yoga means union—the union of body with consciousness and consciousness with the soul. Yoga cultivates the ways of maintaining a balanced attitude in day-to-day life and endows skill in the performance of one’s actions."   B.K.S. Iyengar

Originating in ancient India as a path to spiritual liberation, or moksha, it has developed into a worldwide movement followed by some 30 million people.

Hatha yoga is a branch of yoga that uses physical exercises to master the body, along with breathing and meditative exercises to quiten the mind and withdraw the senses. The word haṭha means 'force' in Sanskrit.

The Hatha yoga practice emphasizes proper diet, processes to internally purify the body, proper breathing and its regulation particularly during the yoga practice, and the exercise routine consisting of asanas or bodily postures. This sometimes includes sequences such as the Surya Namaskara, or 'salute to the sun', which consists of several asanas performed as a fluid movement sequence.

The aims of Hatha yoga have traditionally been the same as those of other varieties of yoga. They include special powers or bodily benefits such as slowing of age effects,  and spiritual liberation. In the 20th century, techniques of Hatha yoga particularly the asanas, became popular throughout the world as a form of physical exercise for relaxation, body flexibility, strength and personal concentration.  It is now colloquially termed as simply 'yoga'. It has also developed into new movements and styles, ranging from the quiet, introspective practice of Ananda yoga, to the energetic and strength-building exercises of Ashtanga.

The benefits of yoga are gained from regular practice. It is a holistic exercise for the body. mind and spirit. 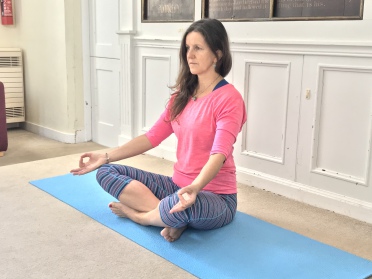